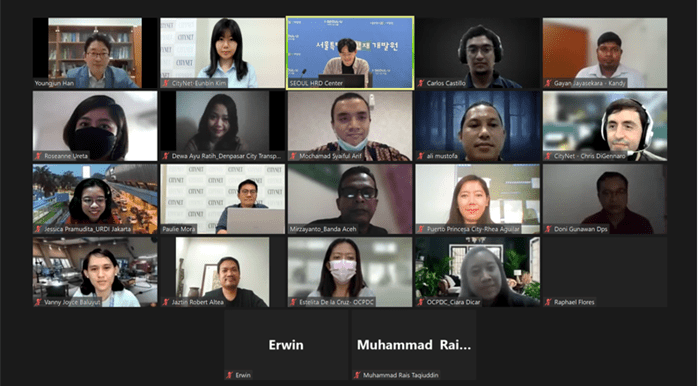 “To resolve traffic congestion, a city needs to increase the capacities of existing roads rather than constructing new ones,” said Dr. Youngjun Han, an associate research fellow at the Seoul Institute. This is one key takeaway from the CityNet-Seoul Human Resource Development Center (SHRDC) Online Training Program on Transportation Policy on 25 April to 13 May 2022. 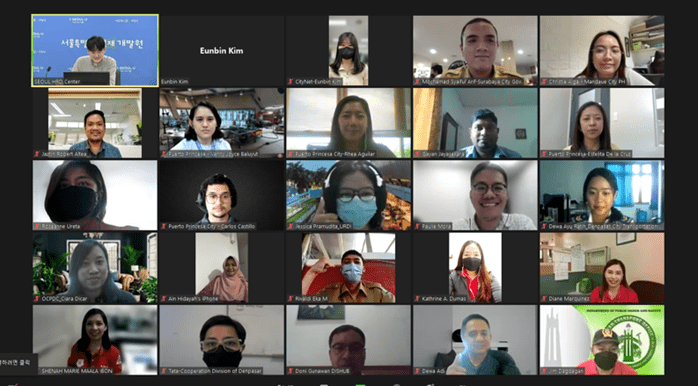 A total of 34 city experts from Indonesia, Malaysia, the Philippines, Sri Lanka, and Vietnam registered and participated in the program. The three-week online program consisted of self-paced learning and live sessions with experts in public transport.

In the first live session on May 6, Director Soo Jin Lee, the head of the Traffic Information Division at the City Transportation Office in Seoul Metropolitan Government, provided a lecture on the Smart Management of Public Transportation.

On 13 May, Dr. Han facilitated the presentation of action plans of the cities of Puerto Princesa, Jakarta, Kandy, and Surabaya. He gave feedback on how to improve their action plans.

For example, Kandy City in Sri Lanka proposed a multimodal transport terminal to reduce traffic congestion. Dr. Han however emphasized that setting up a terminal alone cannot resolve traffic congestion as it only controls a particular spot on the road. Controlling a traffic network is more important than controlling a specific spot to address the problem in the long term.

Moreover, Surabaya City suggested new bike lanes with a visible barrier to encourage more citizens to use bicycles. Cars and motorcycles account for most of the public transport. Dr. Han said operating bike lanes has been a challenge due to illegally parked vehicles and the driving behavior of some motorcycle drivers. Managing the bus system is the preferred option when reducing traffic congestion in the long term. 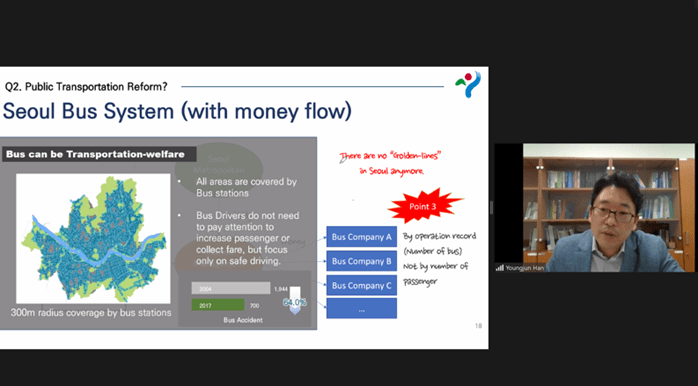 Seoul’s bus system has been regarded as a global model. Among its distinct features is its private-public management model. Seoul Metropolitan Government has set up an Income Management Council which distributes fares collected from transportation cards and its government subsidies to 65 private bus companies by operation record, not by the number of passengers. This system enabled bus drivers to focus on safe driving and eventually led to fewer bus accidents.

Eunbin Kim is a Program Assistant at CityNet. She primarily supports the Senior Program Officer in designing and implementing capacity-building programs for city officials in the Asia-Pacific region. Prior to joining CityNet, she worked as a Research Assistant at the Ewha Public Diplomacy Center, where she coordinated the Korean-German Junior Forums. Eunbin obtained a Master of International Studies in International Relations from Ewha Womans University, a BA in French Language and Literature, and a BBA in Business Administration from Ewha Womans University.