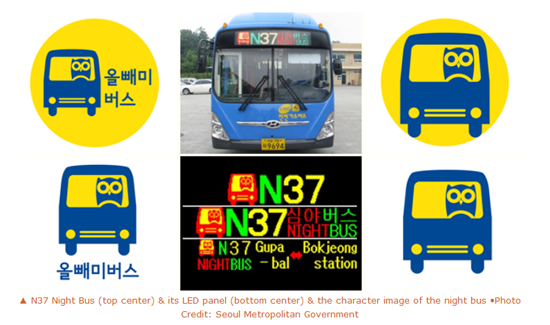 The Seoul Night Bus, also known as the “Owl Bus,” is the brand name of the city’s intra-city buses that run nine routes exclusively from midnight to 5:00 a.m. Like an owl, animated in the dark with its yellow-glowing eyes, the “Owl Bus” was born to make Seoul’s public transportation service ceaseless, carrying the city’s late night commuters.

Selection of bus routes: Big data analysis of the KT call volume during late night hours During the initial stages of mapping out how to operate the Seoul Night Bus, the issue of selecting bus routes emerged. The municipal government color-coded regions by call volume based on the data provided by a private communication service provider, KT. Then, it analyzed the number of passengers who get on and off at each bus stop in the heavy-call volume regions and connected the dots to lead to the most pertinent routes.

Efficient operation: Measures to optimize the operation interval As the intervals between buses grew longer in the longer distance routes, the SMG introduced the simultaneous dispatching system in which vehicles depart simultaneously from both ends of the bus line, thereby minimizing the gap in the intervals between different directions. Passengers can also easily transfer at the major intersections of different routes and the interval was optimized to to 30 to 40 minutes in consideration of the demand and frequency.

Convenience and safety of passengers: real-time operation information The service provides citizens with real-time operation information. Anyone who wants to take the “Owl Bus” can check the arrival time and location of the bus stop in advance through the website or smartphone apps. Meantime, given that the service operates late night, safety measures were critical to protect citizens. Besides the protective partition and speeding prevention device, it was made mandatory to inspect the vehicle before driving. The drivers with proven qualifications are also well remunerated so that they do not have to take on other vocational activities during the daytime hours and can fully concentrate during night time driving.

Safe and Affordable Means of Transportation for Citizens The numbers of “Owl Bus” passengers are on the constant rise. A total of 1,735,000 people have taken the buses from September 2009 to June 2013, making the daily average passengers stand at around 7,000. As for economic aspects, passengers are expected to save approximately KRW 6,000 as the “Owl Bus” charges KRW 1,850 per trip while the average taxi fare in the same timeframe costs KRW 8,000. Given that the most of the passengers are students, self-employed small business owners or workers, the service is expected to help stabilize their household finances.

Meantime, most passengers are concentrated in the timeframe from midnight to 03:00, when students and workers return home completing their after-school self-study and night duties. As the unfrequented time tends to leave them more vulnerable, the “Owl Bus” is considered to help them move more safely. Notably, the “Safe returning-home service” provided in cooperation with the nearby police stations reinforce the safety.

Call for Participants for online sessions on Urban Eco-Solutions

🌏 #ClimateChange and #COVID19 are big problems for the #SDGs! It's especially difficult for vulnerable people, communities, and countries. 😢 Learn more about protecting these people, so no one is left behind by 2030! 🤝 UNITAR CIFAL Jeju is hosting an online workshop, titled "Social Protection Series II: Spotlight on Vulnerable Groups to Climate Risks."