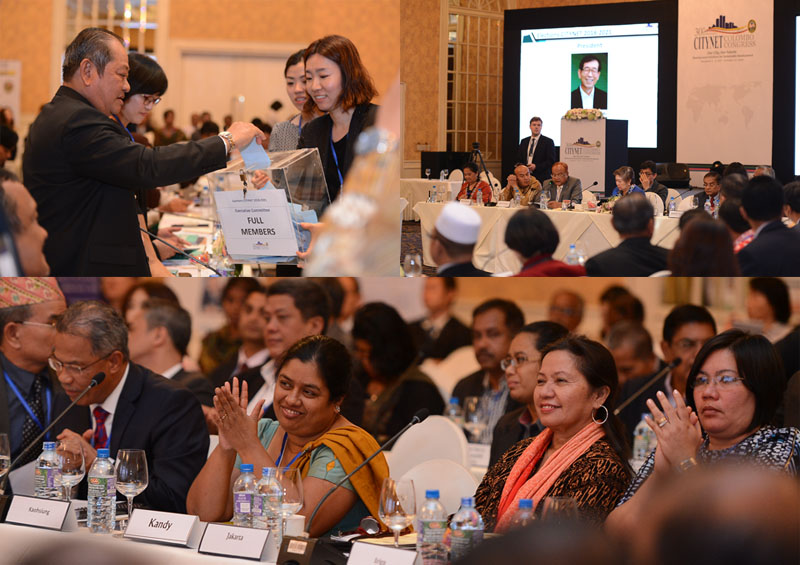 The Mayor of Seoul Park Won-soon continues his leadership as the President of the largest association of urban stakeholders in the Asia Pacific region committed to sustainable development as agreed upon at the CityNet General Council. Mayor Park re-emphasised his commitment for his second leadership term to actively share the best policies of Seoul Metropolitan Government through the tried and tested CityNet programs like city-to-city cooperation, customized capacity development programs, and technical exchanges during the General Council as part of the four-day Congress hosted by the Colombo Municipal Council from 5-8 November 2017.

Sharing his vision on how tackling contemporary urban challenges with more than 25 mayors and vice mayors from across the Asia Pacific region, Mayor Park Won-soon invites all CityNet members to celebrate their city growth to meet CityNet’s vision. He emphasised that cities and countries need to actively cooperate with each other and share their experiences and resources to find solutions to various urban challenges. And in this aspect, the role of CityNet as a multi stakeholder network is more significant than ever before.

CityNet Colombo Congress was officially opened by the Hon. Prime Minister Ranil Wickremesinghe on the second day during the inaugural ceremony, and Hon. Karu Jayasuriya, the speaker of the parliament, graced the occasion as the guest of honour, recounted his experiences as Colombo Mayor between 1997-1999.

Following the inaugural ceremony, the city leaders gathered for a dialogue to share their views on localising the Sustainable Development Goals (SDGs) that hugely depends on the local leadership. SDG 11 states “Make cities and human settlements inclusive, safe, resilient and sustainable” that highlights the importance of cities in regard to sustainable development”. As a result of this Mayors’ Dialogue, all CityNet city leaders made pledges that mayors and leaders of the CityNet member cities, and partner organizations, declare to jointly take effective action to make the cities in the Asia-Pacific region self-reliant, sustainable, inclusive and resilient, to shape the future of cities which are people friendly, socially just, ecologically sustainable and sound, economically productive, culturally vibrant and globally connected cities.

CityNet and Colombo Municipal Council convened more than 300 city mayors, city officials, urban stakeholders and experts from across the Asia Pacific region for the 2017 CityNet Congress to voice the cities’ challenges and solutions as well as network and form partnerships with other CityNet members, partners, and business leaders.

The 2017 CityNet Congress consisted of the two sessions of the Executive Committee, General Council, Mayor’s Dialogue, concurrent sessions and site visits. In addition, this Congress also gave the opportunity to evaluate the network’s activities throughout the past four years and map out the organization vision and strategy for the following years.

This year’s congress marked the network’s 30th anniversary. As the largest urban stakeholders in the Asia Pacific region, CityNet commits to address urban challenges by connecting urban actors and deliver tangible solutions for cities, through various activities from capacity buildings, technical expertise consultation, project management and exposure visits for the past 30 years.