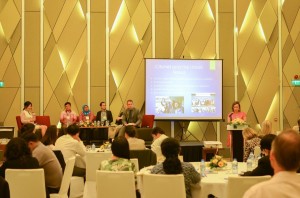 The Third Regional Workshop on Integrated Resource Management in Asian Cities: the Urban Nexus was held from June 25-27, 2014 in Da Nang, Vietnam. The workshop was the third in a series of Nexus Workshops which explore the integration of energy, food security, and water resources in Asian Cities.

As part of a panel on the role of meso-level organizations and regional networks, Program Officer Marina Brenden represented CityNet at the UNESCAP / GIZ Urban Nexus workshop where she spoke about how CityNet promotes resource efficiency in cities through knowledge sharing and the exchange of best practices.

Several CityNet member cities are participating in the Nexus Project, including Da Nang, Ulaanbaatar, Baguio, and Naga City, who each presented their city’s Nexus project and their vision for integrated resource management in the future.

The workshop reviewed the progress of the Urban Nexus project initiatives, current policies, programmes and institutional arrangements for their effective implementation.

Find out more about the Urban Nexus and the Da Nang Workshop here.