Sidoarjo Regency’s Public Hospital, Seoul Metropolitan Government – Seoul National University Boramae Medical Center and CityNet have agreed to create a synergy and establish partnership in the field of education, healthcare and hospital management by signing a partnership charter on 9 December 2016, following a MoU signed by the two hospitals on the same day.

The Director of Sidoarjo Public Hospital, Mr. Atok Irawan and the Director of Boramae Medical Center, Mr. Park Min-hyun first met in September this year during a program on healthcare and hospital management facilitated by CityNet that also brought knowledge exchange in e-governance and water treatment between Sidoarjo Regency and Seoul Metropolitan Government. On their opening remarks, they stated that both hospitals agreed to continue their partnership in a more concrete step that include fellowship programs where Boramae Medical Center welcomes medical doctors from Sidoarjo Public Hospital to attend a short course in Seoul.

The Regent of Sidoarjo H. Saiful Ilah expressed his excitement over this partnership and highlighted how CityNet has played a key role in connecting the two public hospitals. The delegation of Boramae Medical Center that consisted of five people had a chance to visit the Sidoarjo Public Hospital, during which Director Park Min-hyun was particularly impressed by how Sidoarjo Public Hospital is run with full dedication from all components. 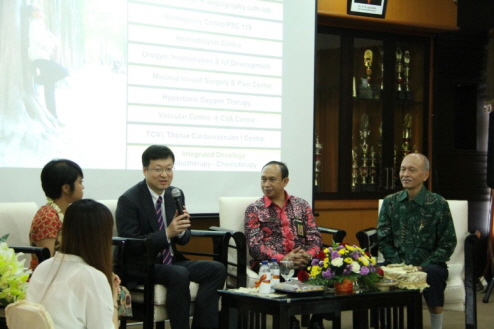 Following the MoU and Partnership Charter signing, representatives from the two hospitals and CityNet held an open discussion attended by officials from Sidoarjo Regency and doctors from Sidoarjo Public Hospitals. Some of the questions raised by the audience touched on education program that can be transferred from Boramae Medical Center to improve the skills of Sidoarjo Public Hospital’s doctors.