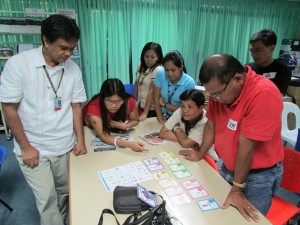 CBARAD participants at the workshop

As a part of the Community Based Adaptation and Resilience Against Disasters (CBARAD) project conducted by the CITYNET Yokohama Project Office (CYO) and City of Yokohama, a team of experts from the Crisis Management Center and Health and Social Welfare Division of the City of Yokohama visited Iloilo to conduct assessment and strategic planning targeted at local communities. The team also included experts from NPO Tsurumi River Networking and NPO Plus Arts, whose activities involve raising awareness on the biodiversity of rivers and teaching disaster preparedness, prevention and response tactics to children.

During this week-long program, the team visited five pilot barangays to conduct the assessment and to get a grasp of the actual conditions of the area.

Iloilo also hosted several meetings and workshops at city hall to sharing ideas of project activities and form a multi-stakeholder partnership among the concerned groups. One workshop, which dealt with the strategic planning of partnerships, was facilitated by the Office of Civil Defense (OCD) of the Republic of the Philippines. During this session the participants drafted action plans outlining the core activities of the project. Sharing their expertise on disaster prevention in Japan, the team members also made an appearance on local television as panelists.

The CBARAD Project, coordinated through CYO, is a three year project in Iloilo, operating with the assistance of Japan International Cooperation Agency (JICA) and in partnership with Iloilo City Government, City of Yokohama, Office of Civil Defense (Philippines), Association of Disabled Persons Iloilo, Central Philippine University, Tsurumi River Networking (Japan) and Plus Arts (Japan). While it will be completed in April 2015, the core activities will continue, pursuing long-term disaster prevention in local Iloilo communities.