On 15 December, as part of the International Urban and Regional Cooperation (IURC) programme, Sejong, Sofia, and Rotterdam met in a series of bilateral meetings to exchange information, knowledge, and discuss areas of cooperation for pilot projects. 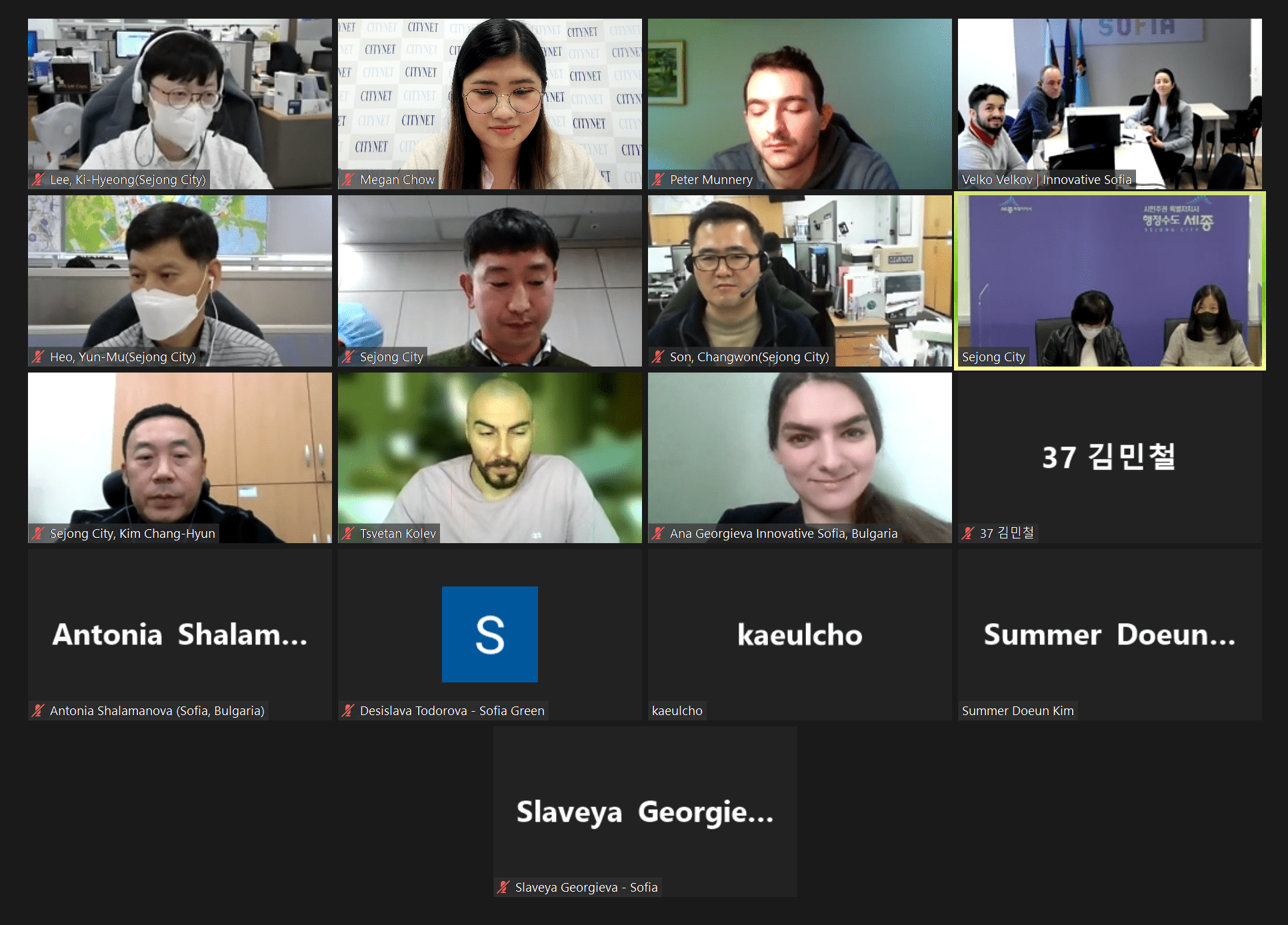 Sejong and Sofia are partnered in the IURC programme for a bilateral partnership. During the meeting on 15 December, they discussed topics such as public bicycle sharing programmes, integrated mobility, and urban regeneration.

Sofia shared on some of their key projects first, sharing about how one of their focuses has been on the integration of their different modes of transport into a unified payment system, in order to make it easier for riders to use. They followed up by presenting how their video and surveillance system can contribute to crowding analytics, allowing conclusions and predictions to be made about passenger flow. Another project that was shared from Sofia’s side was about parking systems, especially Park & Ride. By incorporating Park & Ride below metro stations, people are encouraged to use public transport for the majority of their journey through incentives for utilizing Park & Ride. Finally, Sofia introduced Green Line Sofia, an initiative to regenerate abandoned spaces and unused railways. By greening these areas, Sofia is able to connect the city through green zones, introduce new public spaces for transport and recreation, and improve the attractiveness of the city.

Sejong was happy to introduce their public bicycle sharing programme, Ouling. The bicycle lanes in Sejong are actually connected with neighbouring cities, such as Cheongju and Daejeon. Ouling’s bicycles and kiosk system have been continuously improved based on riders’ feedback, and the use of big data allows Sejong to analyse and optimize the arrangement of public bicycles across the city.

Given the time limit, the two cities parted with firm intentions to continue more detailed discussion on specific topics in future meetings. 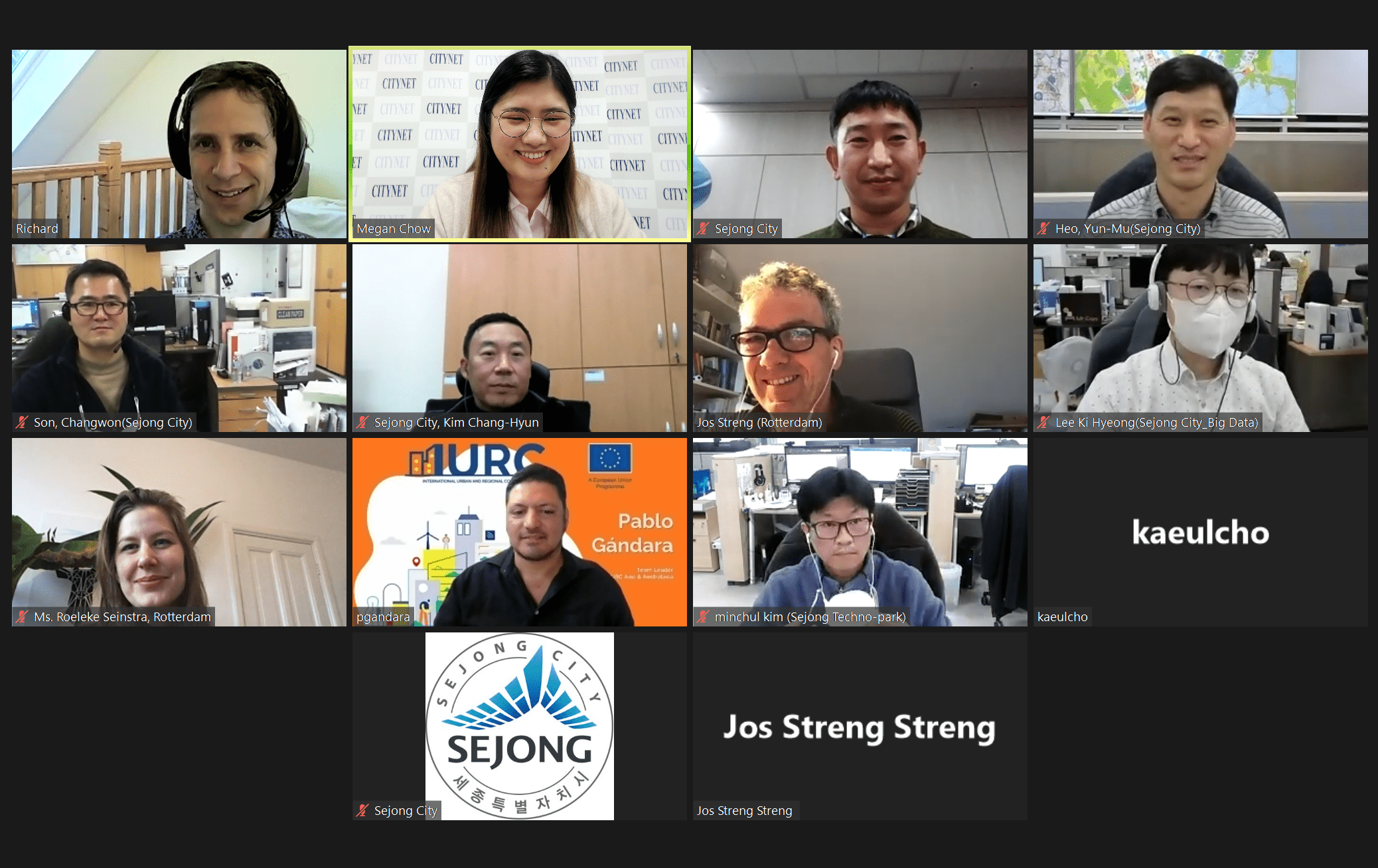 Branching out of their established partnerships, Sejong and Rotterdam also met to discuss what areas of cooperation they might be able to explore.

As part of the implementation of Ouling, Sejong’s bike management system, created in partnership with ETRI (Electronics and Telecommunications Research Institute) and Seoul National University, allows the city to predict the supply and demand of the bike at different locations. This allows employees to fill each rental station with the optimal number of bicycles, maximizing resources and efficient arrangement.

Another topic both Sejong and Rotterdam have found a similar interest in is Smart Mobility. Sejong is working on two way communication between vehicles and infrastructure to prevent traffic accidents by sending  real time warnings. This system can benefit overall traffic and give priority to emergency vehicles.  Rotterdam also shared about their current projects on a similar topic, Intelligent Traffic Lights. 70% of Rotterdam’s traffic lights are already equipped with the hardware and they shared how they plan on increasing that percentage steadily. Just like Sejong, Rotterdam would like to approach the goal of allowing the traffic for emergency vehicles: fire trucks, ambulances, and police. The two cities also share common challenges like data privacy and regulation policies. From their exchange, it was clear that Rotterdam and Sejong have identified some key areas where they can cooperate.

The two bilateral meetings held between these three cities showed a lot of potential for pilot projects and international cooperation. The two meetings were moderated by Ms. Megan Chow, Program Officer at CityNet and one of the country coordinators for the IURC programme in the Republic of Korea. We at CityNet are also looking forward to seeing what will come out of the partnerships born from the IURC programme!

Presenting at International Conference-Cities under COVID-19: A Systems Perspective