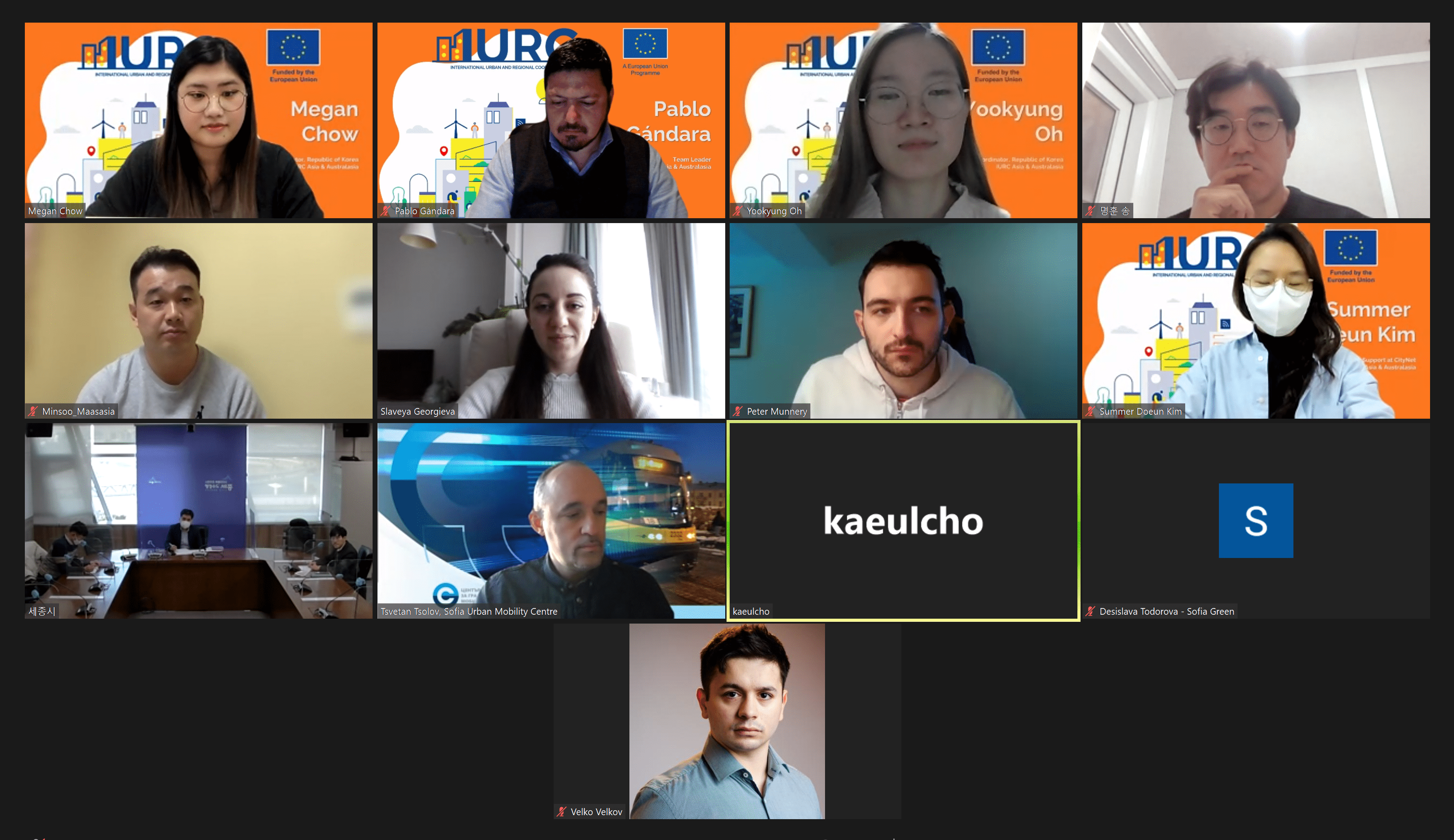 As part of the IURC programme, Sejong, Sofia, Seoul, and Dublin started the New Year with two bilateral meetings.

Sofia and Sejong leapt into 2022 with a bilateral meeting on 12 January 2022. Reflecting the previous meeting, the two cities are now narrowing down their interests and sharing in-depth knowledge on the topic of micro-mobility. Seoul and Dublin followed them on 13 January 2022. They met for the second time and started off their first technical meeting with Dublin presenting its implementation of the Cycling & Walking topic. 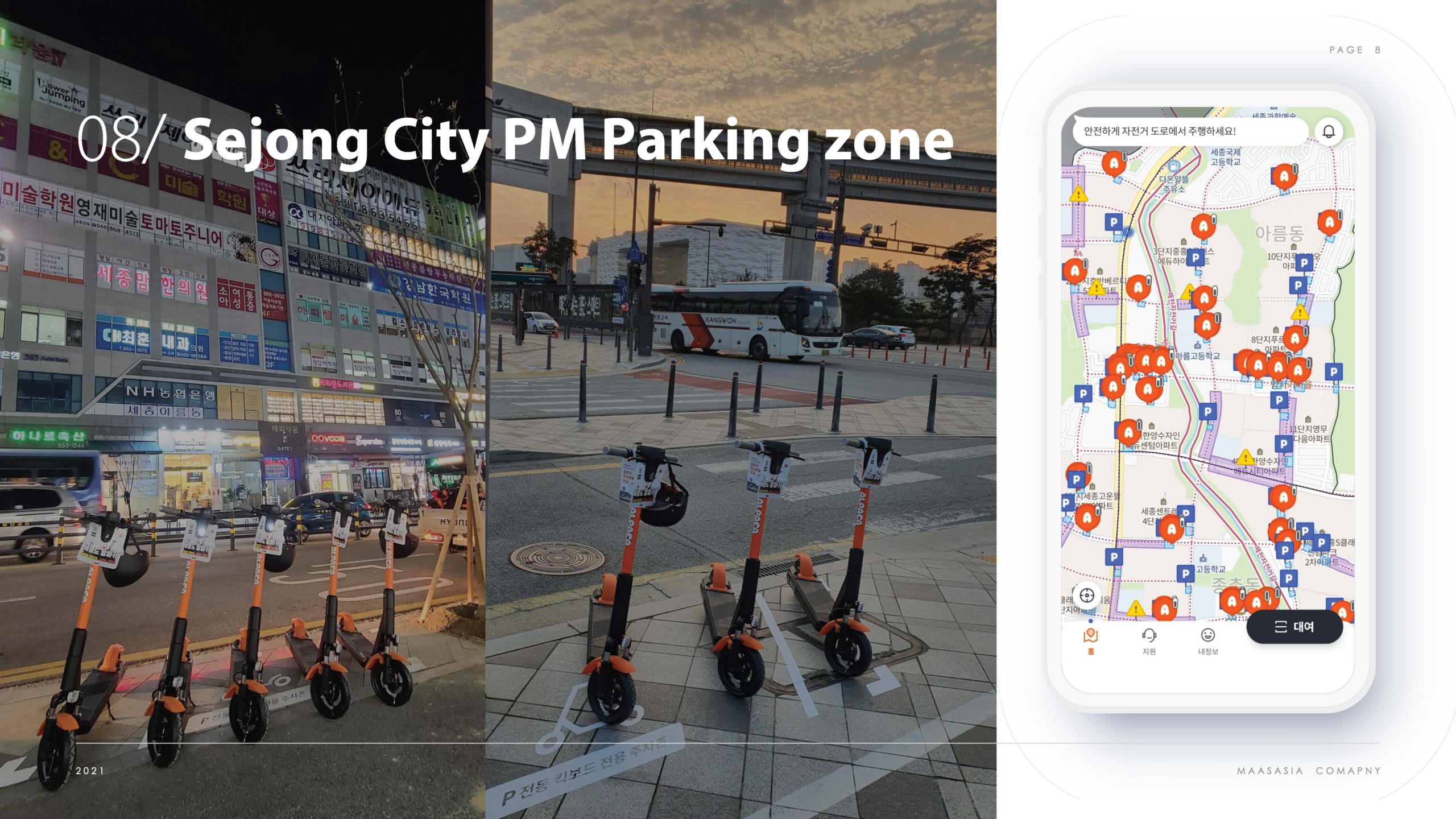 Sejong City and Alpaca, the e-scooter private company, shared the city’s current micro-mobility options and planning. Sejong City shared more data about their public bike system, Ouling. They emphasized that the city would continue to meet the needs of its citizens and retain the micro-mobility options in the city. On the other hand, Alpaca, the e-scooter company, also shared their overall company products and data which demonstrated their efforts to meet the demand in Sejong. Overall, the citizens of Sejong can utilize both public biks and e-scooters as modes of transport.

Sofia shared their insights about the bike usage in their city and plans to increase the micro-mobility and bike usage in the city. At the moment, the public bike system is still in the beginning stages in Sofia. Sofia shared their plan of implementation on automated ticketing system which is integrated with the e-scooter/bike system. Near the end of the meeting, Sofia indicated great interest in Sejong’s public bike sharing system, and Sejong received the interest warmly. Both cities shared inclinations to continue with the topic of public bike systems as one of the topics for their upcoming cooperation.

On 13 January 2022, Dublin shared with Seoul about their projects and implementation on the topic of walking and cycling. Dublin emphasized prioritizing pedestrians and cyclists around the city first and reflecting feedback from Dublin citizens as a whole during the process of implementation. 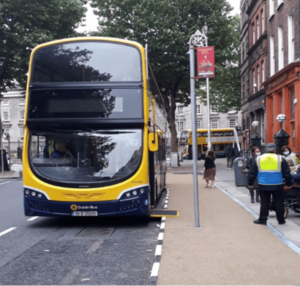 One of the examples Dublin shared on reflecting feedback during implementation was the Bus Stop project. When the city was planning out this project, they sought out for the feedback from disability groups, whose feedback was directly implemented in the project. Dublin not only shared its experiences about communicating with its citizens, but also on gaining insight from educational institutions that conducted research on the impacts of the city’s intervention. The data and the direct feedback from the citizens helped Dublin City Council to understand and gain insight on various levels. 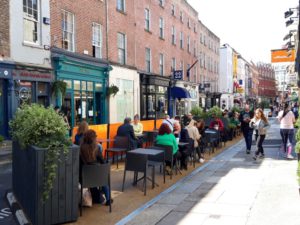 Dublin will continue prioritizing cycling and walking in the city while considering the impact on businesses, the visualization of the implementation, and the outcomes of the project. They will continue to encourage people to join the new movement. Dublin’s implementation has already shown a positive impact, such as rearrangement of parking and creation of extruded kerbs, benefiting pedestrians by clearing the footpaths and restaurants by providing extra outdoor space for customers.

Seoul raised up many questions and inquired specifically about handling stakeholder relationships and methods for retaining projects. Dublin shared various experiences in communicating with citizens and managing both internal and external stakeholders during the implementation.

Seoul will be presenting during an upcoming meeting on 27 January 2022, following up Dublin’s presentation on walking and cycling from their side. Bilateral meetings between cities are scheduled to continue into February 2022.

Busan and Rotterdam gear up for upcoming visits

Call for Nominations for the SDG Awards

Action towards green mobility with Braga and Taoyuan

🤔 Curious to know how #smartcities can contribute to #global #sustainability? 🌐♻️ Join the World Bank's #virtual #knowledgeexchange on Smart Cities for Global Frontier Infrastructure from 18 APRIL to 15 MAY! 🏙️

Within the thematic network “Ecological Transition-Green Deal,” @iurc_aa_india hosted a webinar on ‘Nature-based solutions for flood management’ with experiences from 6 cities. Read the summary: https://www.iurc.eu/2022/05/06/7th-thematic-webinar-flood-management/