The “Indonesian National Workshop – Localization of Inclusive Resilience and Urban Disaster Risk Management (DRM) Practices” was held virtually by the CityNet Secretariat on 4-5 November 2021. The workshop brought together international experts and government officials from 6 cities and regencies in Indonesia, namely from Jakarta, Bandung, Banda Aceh, Surakarta, Sleman, and Sidoarjo, as well as participants from other countries, including the Philippines, Sri Lanka, Thailand and Uganda.

The workshop was to improve the capacity of local governmental officials by equipping them with a better understanding of inclusive resilience and knowledge about the local government’s role to deliver inclusive DRM interventions.

During the opening remarks, CityNet’s CEO, Mr. Geun Hyeong Yim stated, “As the impact of disasters disproportionately affects the vulnerable, local authorities need to leverage their capacities to implement inclusive DRM policies. The gap between planned policies and real actions is an issue that needs to be addressed and reduced.” 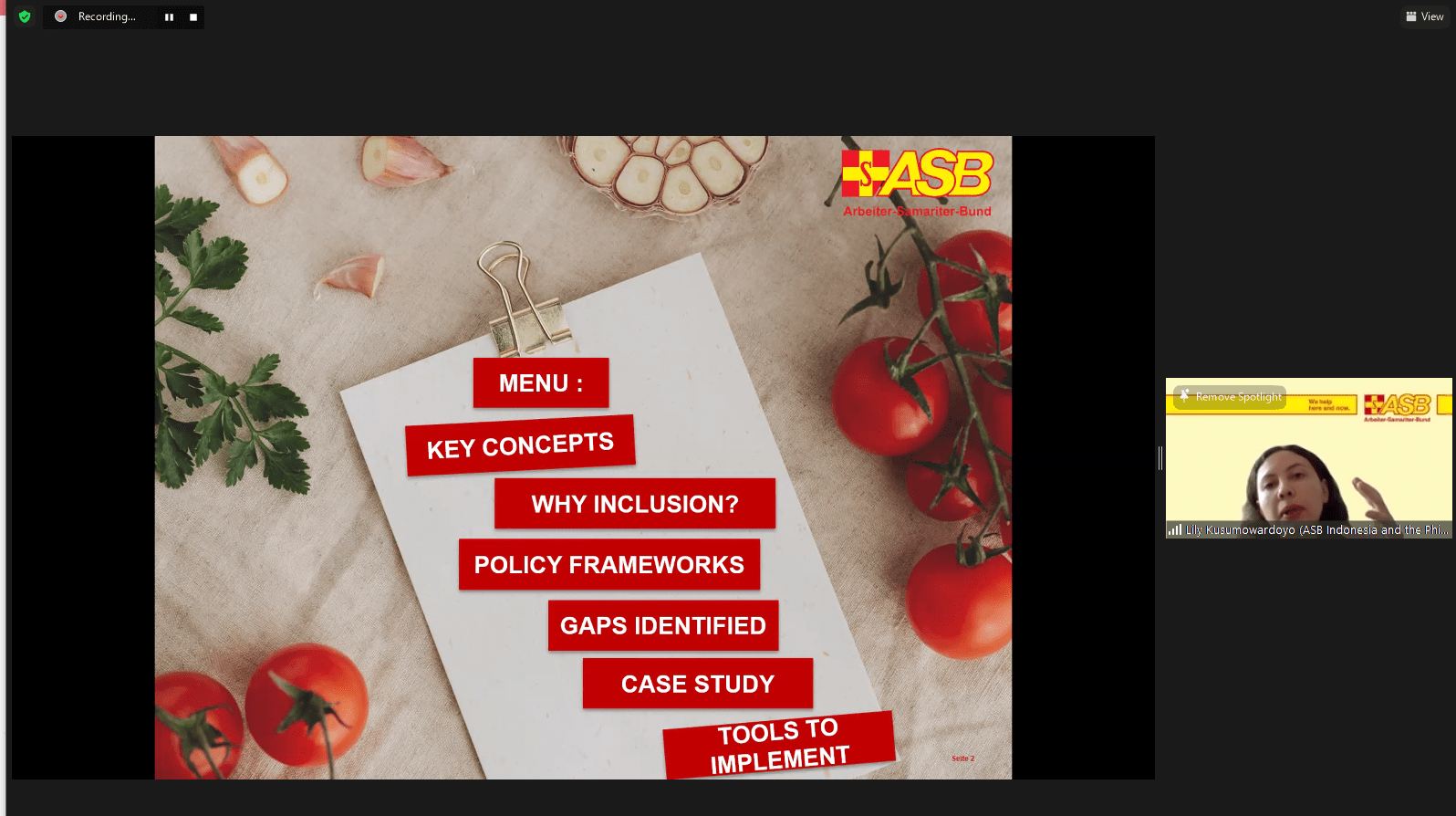 On the first day of the workshop, the first resource speaker was Ms. Chrysant Lily Kusumowardoyo, Partnership Manager from Arbeiter Samariter Bund Indonesia and the Philippines (ASB), a German aid and welfare organization based in Indonesia that works for a community that is inclusive, empowered and resilient. Ms. Kusumowardoyo provided an informative presentation on the background knowledge, status quo and the policy framework of inclusive resilience, along with a project called WASH that she has been working on.

The next presentation featured three specialists from the World Bank, Ms. Keiko Sakoda, Ms. Bandita Sijapati, and Ms. Natsuko Kikutake. They shared about their research on social inclusion in DRM cases in South Asia and Indonesia. Their research concluded that, “Women and persons with disabilities are facing higher risks and are disproportionately affected by disasters. Thus, gender equity, disability, and social inclusion should be considered in all phases of disaster risk management.”

Professor Ye-Hao Song from Tsinghua University delivered a presentation on “Rapid Reconstruction with Local Materials and Inclusive Participation.” He introduced how in southern China, bamboo, a local material, is commonly used for shelter reconstruction due to its durability, availability, and how easy it is to carry. These characteristics of bamboo set it apart as an ideal building material, even for women, children, and the elderly.

On the second day of the workshop, Mr. Safrudin, the Acting Head from Central Java’s Disaster Countermeasure Agency, shared about Central Java Province’s experiences in establishing the Unit LIDi PB, which is a department that specifically takes care of persons with disabilities under the Central Java Disaster Management Unit. Unit LIDi PB works to strengthen the participation of persons with disabilities and other most-at-risk groups, improving their accessibility in pre-disaster, during disaster, and post-disaster phases.

Following that, Professor Wiku Adisasmito, the spokesperson appointed by the Indonesian government and a leading expert, presented Indonesia’s lessons learned from and against COVID-19. He highlighted that the slum areas are a particularly important area to note, as slum areas are vulnerable to cluster infections. 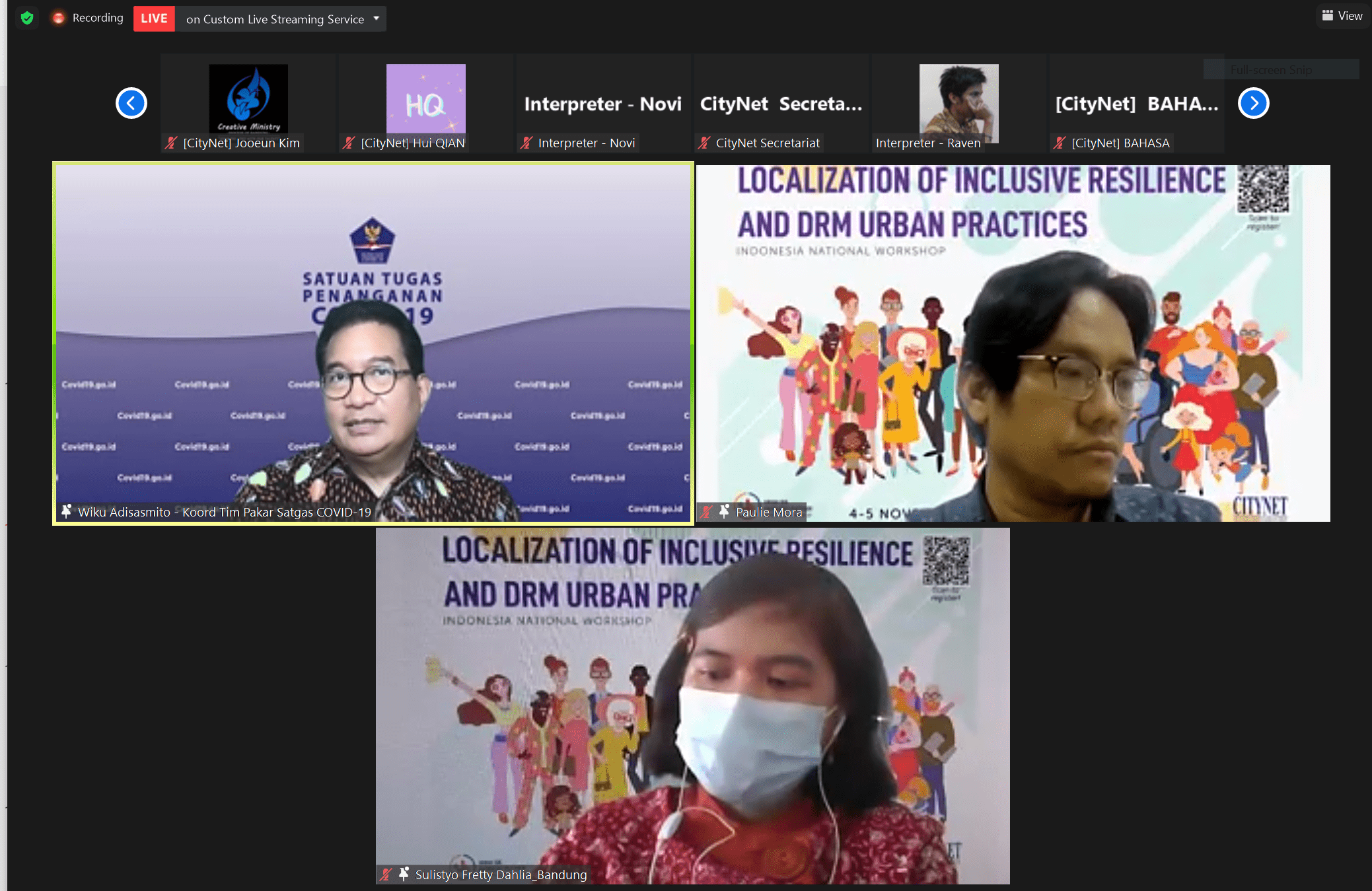 Inclusivity is a topic that is key to creating sustainable cities where no one is left behind, and the DRM cycle of prevention, mitigation, and response is one of the key areas where inclusivity should be strongly considered. Taking into account this core concept of building long-term sustainability from a human viewpoint, CityNet Program Officer Hui Qian, Program Assistant Jooeun Kim, and Meidyana Rayana, a volunteer at CityNet, offered up a new perspective for Indonesian CityNet members through the conceptualization of this national workshop.

Hui Qian is a Program Officer at CityNet, where she manages outreach and CityNet Services. Prior joining CityNet, she had worked at ICLEI East Asia Secretariat, with a focus on city-scale research and projects. Hui has a background of Sustainability Science and Greenhouse Gas Emissions Inventory Compilation. She obtained a Master of Science in International Cooperation Policy from Ritsumeikan Asia Pacific University (Japan) and a Master of Engineering in International Material Flow Management from Hochschule Trier (Germany). She is experienced in working under multicultural environment with multidisciplinary cooperation.