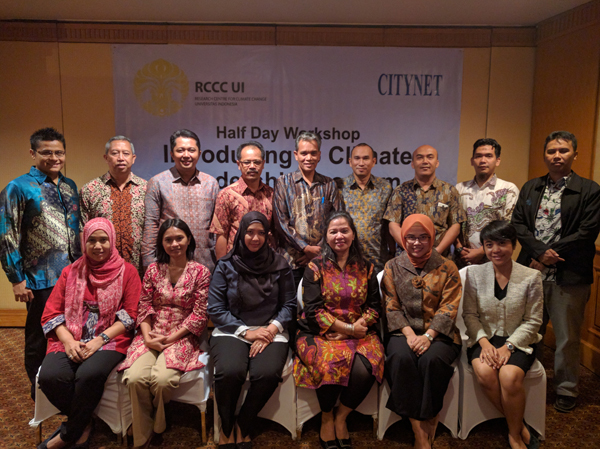 Climate change and global warming have been one of the major challenges facing Indonesia. One of the impacts is the recent vast forest fire that occurred in an unprecedented scale and spread across the neighbouring countries like Singapore and Malaysia. This has spelt disaster to the country’s economy, climate and public health.

Global Forest Watch Fires has detected over 127,000 fires across Indonesia this year, the worst since 1997. Deforestation for commodities plantations such as palm oil became one of the many causes of these fires. Other indicator that shows the climate change threat is the frequency of severe flooding in a number of cities across Indonesia. Adapting to climate change and mitigating its effects will be more challenging and costly the longer this issue is ignored.

Reflecting on this background the Cities and Climate Change Workshop, jointly organised with Research Center for Climate Change (RCCC) of University of Indonesia, was focused on the national condition with discussion ranging from climate mitigation and adaptation, the importance of involving communities and increasing their awareness, government’s role to work on the local policy planning.

A lively discussion to share participating city’s policies that aim at addressing climate change was conducted towards the end of the workshop which also highlighted several challenges in both city and national level. Some cities pointed out the lack of coordination and communication between different departments that slows down the effort in tackling climate change in the country.