Mobile App Created by Students Launched for Public Use in Sidoarjo 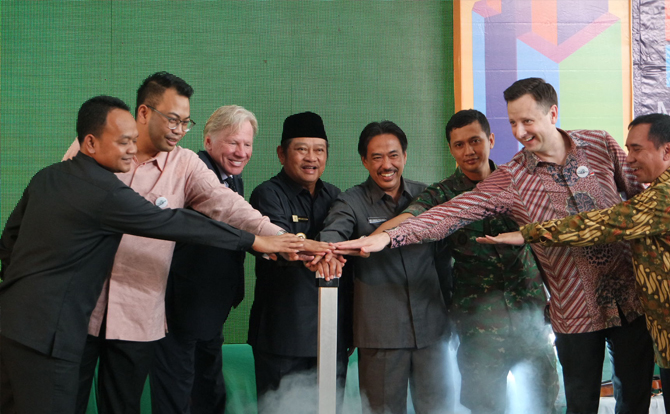 As a result of CityApp Sidoarjo that was held in collaboration between Sidoarjo Regency, CityNet and Microsoft in October 2015, the government of Sidoarjo launched the winning app on February 23rd for public use. The new app that aims at improving the city’s road infrastructure has been developed together with Microsoft under close consultation with CityNet.

During the app’s launch, public had a chance to see the demo and learn how to use the app that can be accessed through various smartphone operating systems, namely Windows, iOS and Android. Previously known as ROAR (Road Infrastructure Report), the app has been renamed M-Bonk that in Javanese dialect, where Sidoarjo is located, means “road”.

The Head of Public Works for Highway Construction and Maintenance in Sidoarjo Regency, Mr. Sigit Setyawan explained that approximately 65% of the total 1,411km road in the city is in poor conditions (based on the data produced in 2010). This condition is worsened by annual floods.

M-Bonk will enable citizens to take pictures of a damaged road to be reported to the department of Public Works for Highway Construction and Maintenance who will respond with the necessary repair work promptly. Once the maintenance work is done, the person reported the issue will receive a notification.

Through this app the government of Sidoarjo is committed to engage the citizen in building the city. Giving his full support to launch this app, Sidoarjo Regent Saiful Ilah expressed his expectation for the citizen to participate more in improving the infrastructure.

This app’s launch marked the first tangible outcome of CityApp that has been developed through collaboration with Microsoft in several other cities.