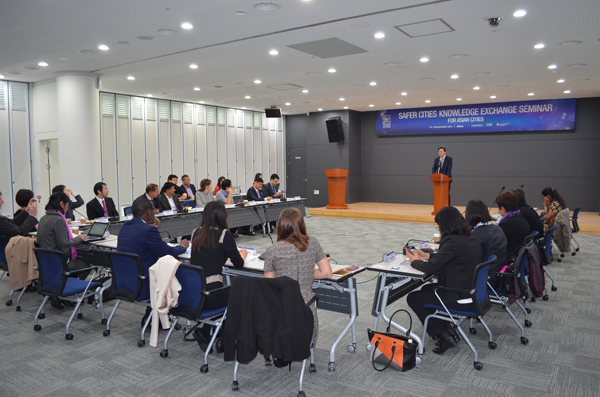 Thirteen participants from cities across the Asia Pacific region joined the knowledge exchange seminar for Asian Cities that was successfully held from November 17-19, 2015 in Seoul, aimed to improve the liveability of cities and quality of life through a multi-level government and multi-sectoral. This seminar is part of the UN-Habitat’s Safer Cities Programme.

In addition, this seminar gave the opportunities to the participating local authorities and urban stakeholders to learn about Seoul’s policies and projects related to urban safety, such as Crime Prevention Through Environmental Design (CPTED), IT safety project and Making Seoul a Safer City for Women Project.

Seoul city further shared its experience in crime prevention by showing them the pilot area for the CPTED in Mapo-Gu. Through this project, nicknamed the Salt Way, the solutions to crime problems have been developed and implemented with and by the community. One collaborative activity resulted in the Salt Way, a well-lit fitness circuit that was attractively designed and equipped with innovative security tools. Seoul city also invited participants to observe the Seoul Transport Operation and Information Service (TOPIS), the general transport control center for operating and managing Seoul’s overall traffic situation.

Not only learning Seoul’s successful projects, participants were also invited to present their cities’ good practices in crime prevention and urban safety. A dynamic discussion was held to identify strong and weak points in each city, to promote future city-to-city cooperation.

This seminar has become a platform to introduce the Global Network on Safer Cities and the available urban safety tools and products for purposes of adaptation, possible piloting and launching in Asian cities. UN-Habitat launched this network in 2012 to further consolidate and systematize experiences on safer cities, subsequently a Global Steering Committee of the GNSC was established in 2013, and the Mayor of Seoul was appointed as a regional-co-chair representing the Asia Pacific Region.