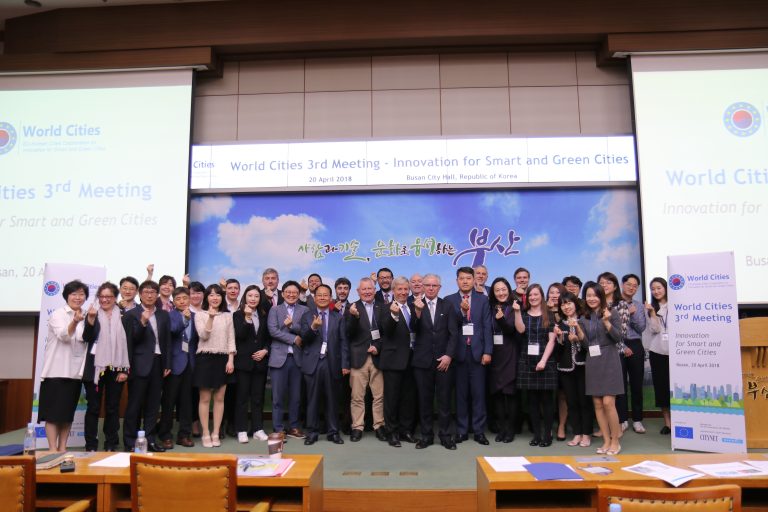 Busan hosted a closing review of cooperation between four Korean cities – Seoul, Busan, Suwon, and Gwangju – and four European counterparts – Barcelona (Spain), Tampere (Finland), Eindhoven (Netherlands), and Scottish Cities Alliance on Friday, 20 March 2018. The cooperation between these cities was made possible by the World Cities project of the European Union that aimed to promote long-term working relations and short-term pilot projects between the cities within the EU and cities in other countries including the Republic of Korea.

The day-long conference was the third meeting of the project and will serve to further strengthen the ties between the EU and Korea, and will help to develop the way forward for the EU-Korea cooperation on sustainable urban development. In the conference, over 30 representatives from the EU and Korean cities focused on the way forward regarding smart city (mobility, ICT, safety), urban economy (innovation, clusters, start-ups), climate change (low-carbon, green energy, resilience) and urban regeneration (cultural heritage, green spaces, affordable housing).

The overall aim of the project implemented by CityNet and Ramboll is to promote better urban policy and thereby improve the quality of life in participating cities. Experts from local authorities involved have identified a variety of topics including urban data management (smart-city), innovation and start-ups promotion, low carbon development, mobility and energy efficiency – just to mention a few.

The World Cities project is driven by bottom-up thematic proposals elaborated and implemented by the cities. City managers from Korea and the EU jointly develop toolkits to mainstream the international urban sustainable development framework (EU and UN Urban Agenda) into concrete projects for the cities. Actions are designed to increase so-called ‘triple-helix cooperation’ between governments, research and business. World Cities has also created concrete opportunities for business while pursuing the sustainable development of the cities involved.

Following bilateral meetings in Korea and Europe in 2017, cities representatives have – for example – developed Letters of Intentions (LoI) or Memorandum of Understanding (MoU) to ensure long-term cooperation.

Call for Participants for online sessions on Urban Eco-Solutions

🌏 #ClimateChange and #COVID19 are big problems for the #SDGs! It's especially difficult for vulnerable people, communities, and countries. 😢 Learn more about protecting these people, so no one is left behind by 2030! 🤝 UNITAR CIFAL Jeju is hosting an online workshop, titled "Social Protection Series II: Spotlight on Vulnerable Groups to Climate Risks."