The focus of the second session of the Climate Leadership Program was on Carbon Finance. We were really excited to see how active and wonderful our participants were. We had a series of four amazing speakers and an excellent moderator who underscored the need to provide financing and revenues to support mitigation and adaptation to address climate change. Carbon Finance refers to the revenue streams that can be generated by low-carbon projects and activities from sale of their global greenhouse gas (GHG) emission reductions by sources, or GHG emissions removal by sinks, or from trading in carbon credits. (World Bank) 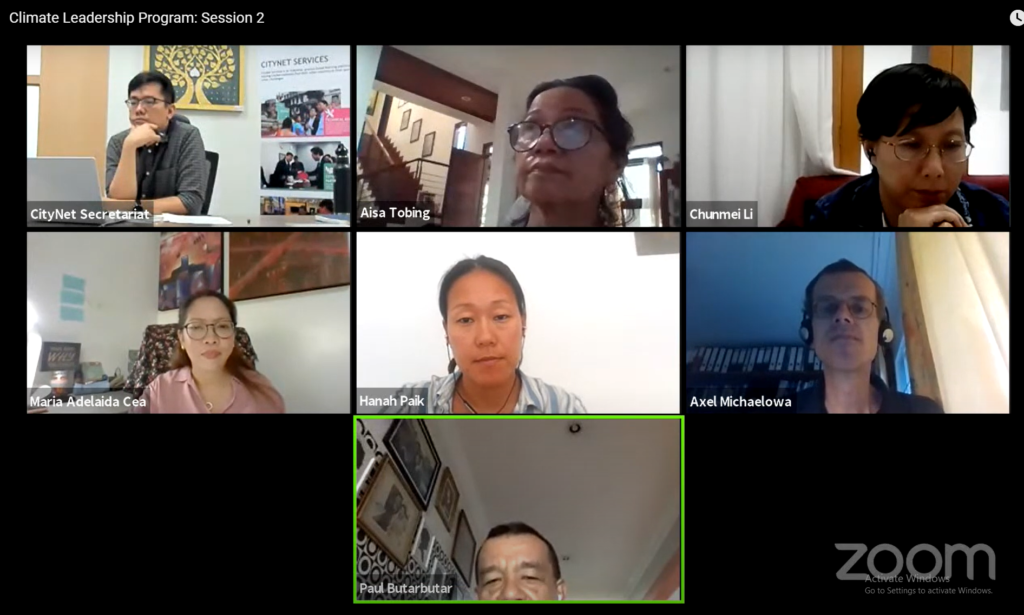 During the opening session, Ms. Maria Adelaida Antonette M. Cea, the session’s moderator, helped set the context for the session by outlining the Paris Agreement and how it relates to Carbon Finance. She then defined the terms “Climate Finance” and “Carbon Finance,” highlighting how they are different from each other. Finally, she proposed a question to set the direction of the second session: How will carbon finance truly support sustainable urban development in the Asia-Pacific region?

Mr. Paul Butarbutar, the founder of PT JJB Sustainergy Indonesia, stated that cities need to take a leading role in climate change mitigation by involving stakeholders from all sectors, especially considering that cities account for 71-76% of global GHG emissions and 67-76% of global energy consumption. Climate finance can help finance the mitigation efforts of stakeholders. Ms. Hanah Paik, the Asia-Pacific Lead, Cities, States, and Regions for CDP, continued on to highlight the importance of private sector engagement in climate finance projects. She explained how the CDP Matchmaking Project enables cities to overcome barriers related to accessing finances and take further steps towards executing their climate mitigation actions.

Mr. Axel Michaelowa, the Senior Founding Partner of Perspectives Climate Group, shared about international carbon markets that use mechanisms like the Clean Development Mechanism (CDM) and how these mechanisms and markets can support mitigation efforts of cities. However, he also noted that so far, cities have high mitigation potential but low participation in carbon markets, but there are new opportunities with the emergence of new carbon markets.

Ms. Chunmei Li, the Deputy Chief of the Climate Change Division in the Beijing Municipal Ecology and Environment Bureau of Beijing City Government, talked about Beijing’s experience on Emission Trading Scheme. She highlighted the process Beijing went through and the outcomes. From 2016 to 2019, Beijing Public Transport’s diesel carbon emission ratio diminished from 57% to 32%.

As a summary of the session, carbon finance is still relatively new to developing cities. Involvement of cities and municipalities in the carbon market has been limited. Engagement of private sector participation needs to be strengthened as in the case of Beijing City Government through their emission trading system. Opportunities, however, are abound as institutions and organizations continue to capacitate cities in accessing carbon finance mechanisms that can offer a new pathway to contributing to their climate actions.

The speakers’ presentations can be accessed below: